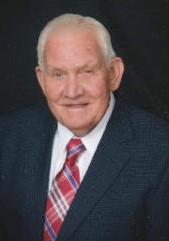 James Edward  (J. E.) Newcomb, Jr. of Randolph, VA passed away on November 12, 2020 at the age of 87 at Sentara Halifax Regional Hospital after a valiant battle with Covid-19.  He was born on March 8, 1933 to the late James Edward Newcomb, Sr. and Alma Brown Newcomb.

In addition to his parents,  he was preceded in death by his son, James Edward  (Jamie) Newcomb, III and his sisters, Mattie Newcomb Huff;  Margaret Newcomb Hardaway;  and Christine Newcomb Kidwell.

J. E. proudly served his nation in the U. S. Army during the Korean War. He served as a sergeant working on tanks, large guns and heavy equipment. He was the recipient of the prestigious H. A. Carrington UDC Military Service Award for his service during the conflict.

On the farm, he loved life as a tobacco and cattle farmer.  His mechanical background led him to invent many ingenious methods, tools and equipment to be used in his daily farming operations. He was also employed as a hauler for Dairymen, Incorporated.

J. E. was a lifetime member of Hebron United Methodist Church where he served as a trustee for many years. He and a few other members used their own tractors and equipment to actually dig the church’s basement and help construct the original classrooms in the 1950’s.

A private graveside service with military rites was held on November 16, 2020 at Hebron UMC in Saxe, VA with Wayne Seamster officiating.

Browning Duffer Funeral Home of Keysville, VA was in charge of arrangements.