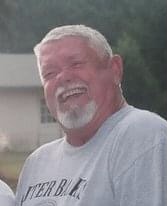 Roy Blanding Hailey, 75, of Keysville, VA was called home by our Lord and Savior on January 22, 2021. Roy is survived by his wife of 52 years, Faye Dixon Hailey, his daughter, Renee’ Hailey Conwell (Mark) of Keysville and a son, Roy B. Hailey, Jr. (Valerie) of Pawtucket, RI. Brothers Raymond Aubrey Hailey, Jr., of Glen Allen, VA and Randall Kim Hailey of Lynchburg, VA, and a sister, Elizabeth Ann Roach (Ed) of Brookneal, VA. Also left behind are six grandchildren, Taylor Conwell Carbone (Darren), Hannah Madison Conwell, Hayley Morgan Conwell, and Stephen Aubrey Conwell, all of Keysville, James Tiberius Hailey and Christopher Michael Hailey of Victoria, VA. He was preceded in death by his parents Raymond A. and Anna Lee N. Hailey, and two brothers Reginald Lee Hailey and Ronald Nash Hailey.
Roy retired from the water treatment plant at Nottoway Correctional Center in November of 2010 after being employed there for over 26 1/2 years. He also served 27 years in the Virginia Air National Guard as a Technical Sergeant.

Roy didn’t know a stranger and always shared jokes and stories just to see people smile.  He also spent many years as a member of the Keysville Volunteer Fire Department. Before his health declined he enjoyed deer hunting, playing golf, going to the beach and riding the ol’ back roads of Charlotte County with his faithful companion, Murphy, whom he lost in April 2020.

A celebration of life service will be held at 2 p.m.,  Saturday, April 24, 2021, at 809 Lunenburg Drive, Keysville, VA, 23947. Memorial contributions may be made to the Charlotte County Rescue Squad, P.O. Box 330, Keysville, VA 23947 or The Alzheimer’s Association, ALZ.org. The Browning-Duffer Funeral Home is in charge of the arrangements.