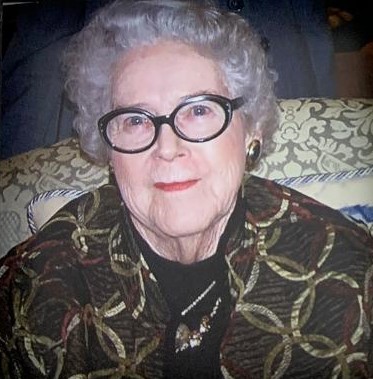 Widowed in 1983, Florence married the late Warren Tresham Kalbacker in 2001, gaining not only a second devoted husband but also the joy of welcoming his family as her own:  sons Warren Kalbacker (Helaine), David Kalbacker (Marion), granddaughters Courtney Kalbacker (Jeff) and Leigh Kalbacker (Brian), grandson William Kalbacker (Meredith) and great-grandchildren Joanna and Oliver.

Following graduation from college, Florence was employed by the Department of Public Welfare in Surry, Va., later moving to Washington, DC where she met her husband of 39 years.  Each served their country during World War II, she decoding for the U.S. Army Department and he in uniform with the U.S. Navy.  When the War ended, Florence and Creighton relocated to Charlotte County, Va. to raise their family. Gregarious by nature and eager to contribute to her community, Florence quickly earned the reputation of an accomplished volunteer serving as Chairman of the Charlotte County Chapter of the American Red Cross, President of the Charlotte Elementary School and Randolph-Henry High School PTAs, and the first woman elected as both a deacon and elder of Village Presbyterian Church. Broadening her involvement in civic affairs, Florence also was Chairman of the Charlotte County School Board, President of  Patrick Henry Memorial Foundation, served on the Governor’s Highway Safety Commission and as a member of the Board of Directors of Crestar Bank, Patrick Henry Boys Plantation, and the Crossroads Community Services Board.  Like her father, Florence was deeply committed to Southside VA Community College, ably serving on the SVCC Foundation Board of Directors and later being named Director Emeritus of the Foundation Board.  In 2006 Florence was honored as the first recipient of the Chancellor’s Award for Leadership in Philanthropy recognizing her outstanding contributions to the growth and development of Virginia’s Community Colleges and Southside Virginia Community College in particular.

When Florence relocated to Westminster Canterbury, it was second nature for her to continue  her passion for service there. In 2015, she was honored as a recipient of the Laurel Award in recognition of her volunteer contributions within the Westminster Canterbury community.  Frequently heard saying, “I’ve always liked to tell people what to do and where to go,” Florence created the perfect volunteer niche for herself as an official greeter welcoming visitors to the Mary Morton Parsons Health Center.

Florence Daniel Riepe Kalbacker was fiercely independent, relished robust laughter, loved all things yellow, and whirled through life with a vibrancy not to be forgotten.  Her effervescence among us is missed. The family celebrated Florence’s life in a virtual memorial service July 12, 2020.  A graveside committal service will be conducted at Village Presbyterian Church, Charlotte Court House, Virginia on Saturday, June 19, 2021 at 11:00 a.m.