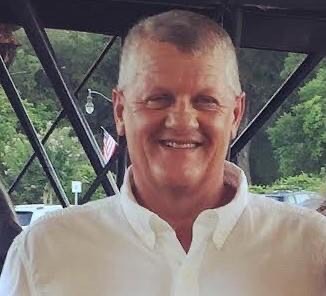 James Randy Andrews, loving husband, father, and Pop-Pop, passed away on August 13, 2021. He was born on July 12, 1956, the son of the late James Carlton Andrews (Jimmie) and Kathryn Tucker Andrews (Becky).

Randy was known throughout the community for his welcoming smile, bright blue eyes, and warm hugs. True to his upbringing, Randy was an able businessman and devoted worker—from manning the deli at Andrews Supermarket to serving lunch at Randy’s Deli to rising through the ranks at UPS, retiring as an Enterprise Sales Manager—he skillfully managed any task thrown his way with wit, a calm demeanor, and a smile.  While some retirees spend their time on the golf course, Randy became a licensed, successful real estate agent (although you could always find him on the golf course at least once a week).  Whether golfing, working, cutting grass, or serving as an unofficial family meteorologist, Randy put his heart into every detail of his life.

Randy also loved spending time with his family, especially his kids and grandkids. His love and unwavering support of his family was evident in every action and conversation.  Always a University of Virginia fan, UVA sports, especially football, became a religion after his daughter attended UVA. When his son started his own business, Randy stepped in to help wherever needed, spending endless hours on a lawnmower (which, if you knew him, you know he secretly enjoyed). When his first grandchild arrived, he was outside the delivery room, eagerly waiting; he loved babysitting his grandkids as they grew in number, often devoting his days to the task. He taught love, patience, kindness, the art of a good story, a fondness for Holden Beach, and the importance of bread with every meal.

A graveside service will be held Tuesday, August 17, 11 a.m. in the Price Family Cemetery, Meherrin Presbyterian Church. Pastor Chris Kesler will officiate. Memorial contributions may be made to Charlotte Court House Volunteer Fire and Rescue or the Randy Andrews Scholarship at Southside Virginia Community College. Browning-Duffer Funeral Home, Keysville, is in charge of arrangements.